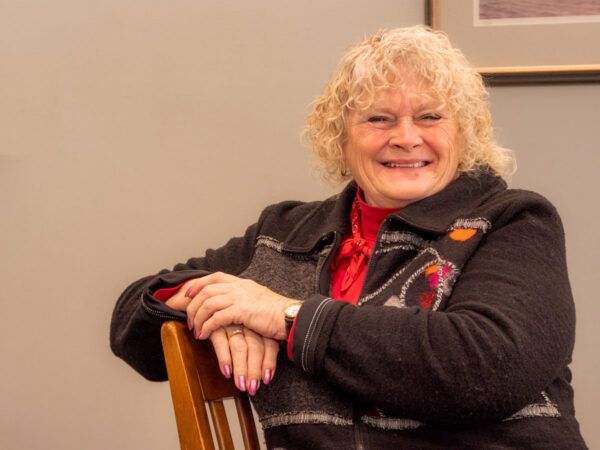 Carmen Harris, 68, in Lincoln County, works as a Direct Support Professional (DSP) for an organization which provides services for people with intellectual and physical disabilities.

I’m a behavioral specialist by trade. I started my career working with kids, which is where I thought my passion was. And what I found out was some parents had to change their ways for children to change their behaviors.

I worked for New Hope for Women for five years, starting in 1990. While I was there, I met a woman at DHHS in the foster care program who encouraged me to be a foster parent. So, I took two teenage boys in. That was their last stop—they either went with me or went to reform school. I did foster care for 11 years and then thought about retiring.

Being in this job, I’ve learned how to talk with people who aren’t able to speak more than a few words, which is something the average person can’t do.  Empathy and compassion are needed to do this kind of work. I think I had it for people in general, but I didn’t think I had it for the people I ended up working with. But, after being in this job for so long, I’ve developed a deeper sense of empathy and compassion for the people I serve.

How would you describe the impact of your work as a DSP?

After I retired, I decided to just work part-time at a restaurant in Damariscotta. Every once in a while, a group of people with intellectual and physical disabilities would come in with their caregiver for lunch. There was one guy in particular, who I knew I never wanted to be around. It turned out the community center was having an open house and I found myself filling out an application and getting hired on the spot. I said in the interview, ‘I never want to work with this particular individual [who would come in for lunch]. He’s too much.’ He talked constantly, but he didn’t use words, just gibberish, so I couldn’t understand him. He always wanted everybody’s attention.

I’d only been working there for two months when they put this man in my care. I thought, ‘I can’t do this.’ But time went on, and I took him to church one day. As we were driving home, there were snowmobiles on the side of the road and so I said to him, ‘Want to do that?’ He said ‘No.’ I said, ‘Why?’ And he put a finger across his neck and made a snapping gesture. I realized at that moment he meant ‘I’ll break my neck.’ And I cried, because of the injustice I’d been doing to this man, thinking he didn’t understand a word I said. He might have been nonverbal, but I finally began to understand him. And, he has turned out to be one of my favorite people. I’ve taken him to Disney World twice; he’s just an absolute gem.

What advice would you give people who want to be a DSP?

I think for older people it’s a perfect part-time job, especially if you’re ready to retire, but still want something meaningful to do with your time. This group of people is so rewarding. I go home every day with a smile on my face because something during my day has tickled me. Every single day. And that’s not to say that there aren’t days where things don’t go right. But it’s up to me to find out what my clients are trying to communicate and to help them.

Another thing I’d advise is for new DSPs to shadow or train at the houses they want to work in so they know it’s a good fit.

I think being a parent and a grandparent has helped me with some of the people I serve. But, it’s really about compassion. That’s the main thing you have to have to do this job.

You need to be flexible and go with the flow. The day may not go the way you think it’s going to—but do what the client wants, figure out what their style is, and how they’re feeling. It’s not about what you want.

When my client smiles, which she doesn’t do very often, and it’s genuine– that’s the reward. She has these wonderful little dimples. I’ve seen her smile to appease somebody, but when she smiles for me and those dimples come out, it makes me feel like I’ve reached her.

When the general population can’t understand our clients, but we can, it makes them feel heard.

I’d say 90 percent of clients who are nonverbal can still say the word ‘hug.’ And the guy I was telling you about before not only said ‘hug,’ but he also learned to say ‘hold.’ So, I’d hold him until he was ready to stop. It’s that human connection. When the general population can’t understand our clients, but we can, it makes them feel heard. I’d say 90 percent of clients in our agency are placed there by their families and are forgotten for the most part. However, the two people I mentioned do have family. For the rest of them, we are their family.